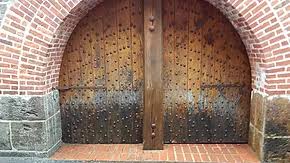 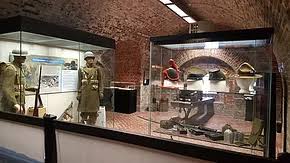 At the time of completion , “the fort was originally trapezoidal in shape and of brick and masonry construction. Its seacoast wall mounted 32 and 42-pounder guns, with the remaining sides and rear being protected by 24-pounder flank howitzers. The fort had two missions.” Major Additions were made in 1870 and 1900s.  Many important individuals made Fort Hamilton their home. “Between 1841 and 1846 Captain Robert E. Lee resided at Fort Hamilton and served as engineer in charge of all the fortifications defending New York’s harbor. Brevet Major Thomas J. (Stonewall) Jackson served at Fort Hamilton as an artillery officer from 1848 to 1849. And Captain Abner Doubleday, closely associated with the development of baseball, served as post commander” It was used as an Embarkation Center during World war 1 and 2.  The fort was designate a Historic Landmark in the National Registry in 1974.

The Harbor Defense Museum was founded in 1980  and is the only Army museum within the City of New York.  Harbor Defense Museum has a fine collection of military artifacts from the Revolutionary War to World War II. According to Justin Bait, The museum curator, “It (Museum) is housed in the garrison’s caponier, a freestanding bastion located in the dry moat designed to defend the rear of the old fort (1825 – 1831). The caponier, which is commonly considered the finest example in the United States, is also the museum’s most precious artifact. It has survived largely intact, preserving many of the fort’s original architectural elements which have been lost elsewhere to renovations.”  The museum is worth the visit. A true hidden gem in the heart of Brooklyn. You will get a personal tour from one of the vets who work there. Their knowledge about the garrison and artifacts is amazing. Take advantage of their experience and knowledge. The museum is small but holds so much history and many stories.

Access to Fort Hamilton
Fort Hamilton is located on southwestern side of Brooklyn between the Dycker heights and Bay Ridge neighborhood.  The fort is still active.  You will have to go through a background check to access the museum. Still worth it!
All persons age 18 and over must have a valid purpose and authorized state or government issued photographic (photo) Identification (ID) for access to Fort Hamilton. Persons age 17 and under are not required to present photo ID unless operating a motor vehicle. Vehicle operators are required to present a valid registration and insurance card.
Check out Harbor Defense Museum on our youtube channel–https://www.youtube.com/watch?v=54pxIIUaqFw
GO FORTH, EXPLORE AND DISCOVER!
By- Steffry Sanchez