Wave Hill is a public garden and estate along the Hudson River in the Riverdale section of the Bronx. The estate is 28 acres and includes rare gardens. Wave Hill dates back to 1843 where the original fieldstone mansion stood. The estate  is Colonial Revival architecture and Greek Revival architecture.It was owned by a lawyer named William Lewis Morris. It was then purchased by publisher William Henry Appleton in 1866.

He enlarged the house and added gardens and greenhouses to the grounds in 1890. During this time, the house was leased to Theodore Roosevelt in the summers of 1870 and 1871. It was also leased to Mark Twain. In 1903, the estate, along with Glyndor, a house built by the Harriman family in 1888, which later burned down and was rebuilt in 1927, was purchased by George Walbridge Perkins, partner of J.P Morgan. He performed extensive landscaping to the the grounds. By 1960s, the land was given to the City of NY. It  was added to the National Register of Historical place in 1983.

The garden is truly a hidden marvel in the Bronx. It includes many rare species of plants, greenhouses, beautiful trees, botanical garden, a culture center, an art gallery and many events for families.  Despite the fact that it is in NYC, Wave Hill is relaxing and serene. It overlooks the Hudson river and the view is glorious! There is an admission fee but free on Tuesdays and Saturdays from 9am to Noon.  We completely recommend this true gem. Whether you go for an event, a walking tour or just take a hike on one of the many wooded paths, it is one of favorite hidden gem in the Bronx. 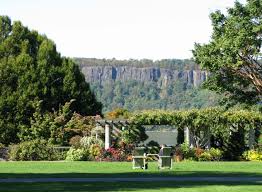