Today we are reviewing the Morris Jumel Mansion. It is located in Manhattan and it’s the boroughs’ oldest house. It was built-in 1765 by Britain Military officer Roger Morris as a vacation home. The property at the time was 130 acres of land and the mansion sits on the highest point in Manhattan. At the time of its construction, the house gave view of the Harlem River, Hudson River and into New Jersey. The island of Manhattan was all farms and woods at the time.

The Morris family left their house behind at the start of the revolutionary war. Due to the fact that were Britain loyalist. George Washington seized the house and made it his Headquarters in 1776. After Washington was forced out of Manhattan, The British troops used the property and mansion as a base.

When the war ended, the government took over the property. The house is one of the major remaining landmarks of Battle of Harlem Heights. The mansion served as a tavern and farmhouse. By 1810, Stephen Jumel purchased the property.  The french immigrant moved in with his former mistress and wife, Eliza Jumel and adopted daughter Mary Bowden. The Jumels remodeled the house, adding the Federal style entrance, and redecorated the interior in the Empire style. The Jumels separated their time between New York and France. After the death of Stephen Jumel, Eliza Jumel remarried to Aaron Burr who ran for presidency but lost to Thomas Jefferson. Eliza Jumel divorced him in 1836 and divided her time between Upstate, New York, The mansion and New Jersey. The adopted daughter’s family lived in the mansion until 1862 with Eliza. Eliza died at the age of 90 in the mansion on its 100 year anniversary in 1865. 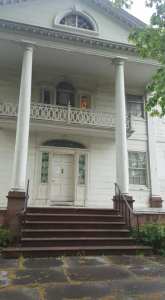 In 1882, the Jumel heirs broke up the 115 acres of the estate into 1058 lots where now stands the Jumel Terrace Historic District. The House itself was purchased by the city of New York in 1903. It is an early example of the Palladian style of architecture. The design included a double-height portico and triangular pediment supported by grand Tuscan columns, and a two-story octagonal room at the rear of the mansion. The house has been said to contain “some of the finest Georgian interiors in America.” During its time, the mansion welcomed many famous visitors such as Thomas Jefferson, Alexander Hamilton and even John Quincy Adams.

Today, the house is lavishly decorated with period furnishings and careful reproductions of period carpets and wallpaper. It features nine restored rooms, one of which was Washington’s office.  It was converted into a museum in 1904 and refurnished in 1945. The house is now owned by the Park and Recreation and is a member of the Historical House Fund. The house became a New York City landmark in 1967.Personal artifacts of Roger Morris, George Washington, Eliza Jumel and Aaron Burr are part of the museum’s collection.An archive and reference library  in the house’s third floor.

When she married Stephen Jumel, Eliza Jumel became one the wealthiest woman in New York.  At the time of purchase, Eliza had $2,000 knocked off the price of the house due to rumors. Rumors had spread that the mansion was haunted by American and British Soldiers. She lived a life of luxury and wealth but Eliza Jumel faced many accusations of helping her husband pass on to his next life. During a séance, investigators said they heard Stephen Jumel accuse Eliza of unwrapping his bandages and letting him bleed to death. There has been many reports of witnesses seeing the spirit of Eliza Jumel.  It is said that during her last years, She suffered from dementia in her mansion. She is buried in the family’s mausoleum just 5 blocks away from the mansion. The mansion is said to have at least 5 to 7 spirits in it. The most famous is of Eliza Jumel.

In 1964, a group of students waiting outside for the curator to open the museum for a tour.  As the group grew restless and loud, a stern woman came to the balcony and told the children to “hush because her husband was very ill”. The woman then goes inside the house and close the door to the balcony. When the curator finally arrived, the group asked why didn’t the woman opened the door. The curator assured them that no one was in the house and the group realized they had just witness the ghost Later, the children all pointed to a portrait of Eliza Jumel hanging in the entranceway, identifying her as the woman who had scolded them.

Visitors have said to witness British soldiers as well as American. Others says they encounter a young servant girl in distress. It is said she killed herself in the mansion. The mansion is featured in many  ghost haunting articles, videos and pictures but the most famous is by the ghost adventures. Even the New York Post did their investigation. In Ghost Adventures videos, they captured a few frightening sights.

Whether you go because of the haunting , the history or the architecture, it is a must see! The architecture is grand and beautiful. The history is rich and delightful.  It cost $10 to tour the house. Please be mindful and respectful. This is a hidden gem because it is widely unknown to New Yorkers and tourist. Would you visit the ghost of Eliza Jumel?